Crêpes and galettes (savoury buckwheat crêpes) are the traditional dish from the region of Brittany, though they are very popular all over France, and now worldwide. Brittany is a region on the Atlantic coast in the North West of France. The savoury buckwheat crêpes are crunchier than the sweet ones and can be filled with vegetables, fish or meat.

Funnily, buckwheat is not a cereal, it’s related to sorrels, knotweeds, and rhubarb. It has no gluten and therefore should be suitable for gluten-intolerant people. I’d rather say that my galettes are 99% gluten free though, as buckwheat can be grown near wheat fields and the wind could bring seeds from one field to another. Buckwheat contains a lot of vitamins, minerals, vegetable based proteins and is very high in carbohydrates (80%) and antioxidants. Buckwheat proteins contain a high concentration of all essential amino acids so it’s a great healthy ingredient to use. In Brittany, the traditional galette is filled with a sausage (galette saucisse) but the most popular one in France is the “complète”, a galette with ham, grated cheese and egg.

Sweet crêpes are made with regular flour, eggs, butter and milk. French’s favourite is the Nutella crêpe, with added whipped cream for sweet tooth like me! Traditionally, we would have our crêpes with cider (from Brittany and Normandy) naturally fermented. It’s refreshing and simply delicious with galettes. 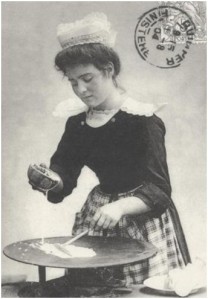