Have you ever tasted authentic French crêpes? MIAM offers a range of sweet crêpes and savoury ones (we call it galettes in France, they are delicious and 99% gluten free!) for private events, markets and festivals. We serve for example egg, ham and cheese or spinach, feta and pesto galettes. Plus a lot of sweet treats like crêpes filled with homemade raspberry jam, homemade lemon curd, maple syrup, rhubarb and red berries jam, Nutella and our very popular salted caramel.

After travelling in Australia, I (Aude) fell in love with this beautiful country – and with a very nice Tasmanian man too! This country gave me a lot and I wanted to bring to Australia some French tradition and great recipes in return. So I came back to France for a few months and got trained at l’école des maîtres crêpiers (Crêpes master School) in Brittany, a region in the West of France where the tradition of crêpes come from and where making crêpes is considered like an art.

Why crêpes? Because in France we love it! And you’ll love it too. For lunch, dinner, as a snack or a sweet treat, we eat it at any time of the day. They’re not like the usual pancakes you could have for breakfast. Crêperies in France have all their own secret recipe for crêpes and the great thing is you can fill it with pretty much everything you want! It’s simple, tasty and yummy. That’s why I named my crêperie MIAM, it means yummy in French 🙂

WHERE TO FIND OUR STALL?

Every Saturday from 8.30 to 3 at Salamanca market (site 311, last stall at the Battery point end of the market, near the Ball and Chains restaurant)

We’re also excited to be part of the best Tasmanian festivals: the Taste of Summer on PW1 Hobart 🙂 Festivale in Launceston and A Taste of the Huon.

– A Festival Called Panama from Friday 11th March to Sunday 13th at Golconda, north of Launceston

– Richmond Village Fair on Sunday 3rd April from 10 to 3 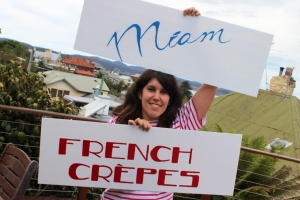